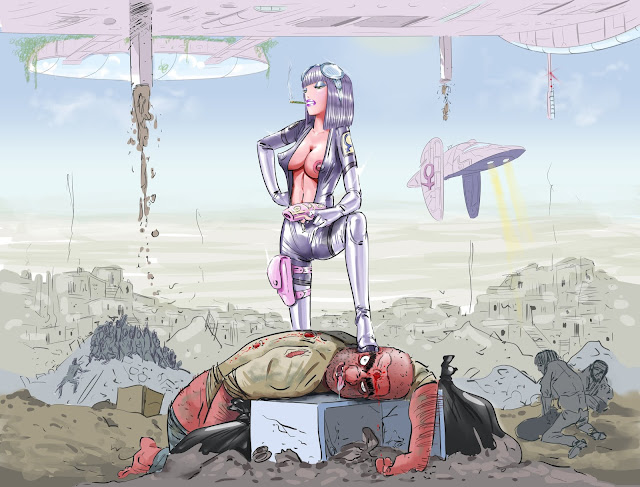 While men huddle like cockroaches in a world ravaged by their stupidity and greed, building endless and disgusting landfill cities riddled with filthy and smelly shacks, women, thanks to their initiative, wisdom and superior intellect, have built huge and beautiful aerial cities, true paradises in the sky where they live in peace, harmony and prosperity, and in which Sorority reigns triumphant.

The few men who are admitted to female cities are treated as mere beasts of burden. They do the hardest and most demanding physical tasks. And yet they would not trade their fate for that of their miserable fellows on the surface, working as hard as they can in the service of women, whom they recognize as their natural superiors and whom they worship as goddesses.

Through gigantic cylinders, the organic waste of thousands of women falls to the ground, where large agglomerations of men fight like animals to get the best pieces that will be devoured by the luckiest of them as authentic delicacies.

Young Eva contemplates all that rot with disgust, but she will continue to descend to the surface of the planet with her friends to practice her favorite sport: hunting.

The game is simple: they agree with a male to act as prey for the girls' amusement. If he manages to survive only 1 hour to his beautiful huntresses, he will have access to the aerial paradise and to a golden slavery.

So far, none have refused. And so far ... none have succeeded!

EVA: This is Eva, sisters. Game over: I hunted the pig. I located him quickly, but before finishing them, it amuses me to see how they crawl on the ground whimpering to kiss my boots and beg for mercy. I'll tell you about everything at home with ease... and I'll show you his huge cock! Now let's get out fast. The very sight of these stupid beasts wallowing in their shit disgusts me! 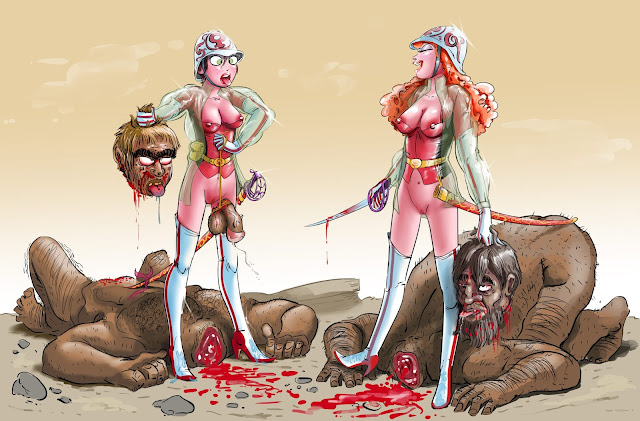 "HO HO HO! LOOK AT ME! I'M A BIG BAD MALE!I HAVE AN ANT BRAIN BUT I THINK I´M BETTER THAN WOMEN BECAUSE A FAT SAUSAGE HANG BETWEEN MY LEGS"

The wave of the feminine Empire spreads unstoppably across the world. The rotten and corrupt male regimes fall before the irresistible advance of the troops of the Superior Sex.

The males,trampled on his stupid arrogance, now crawl humiliated and submissive at the feet of their beautiful conquerors, begging for mercy while they lick whining their boots.

Is it strange that women consider such pathetic beasts ridiculous?

THE NO-FUTURE IS FEMALE 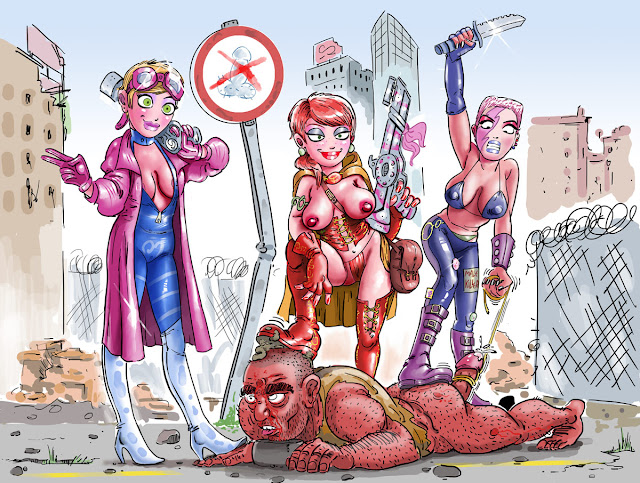 As women strive to rebuild cities and civilization after the great Disaster, men roam the fields and forests, stupidly fighting each other, loitering, and occasionally approaching cities in order to steal. It's no wonder hunting such stupid and harmful vermin has become a favorite hobby for many women.
Publicado por FJCANO en 0:28 No hay comentarios: 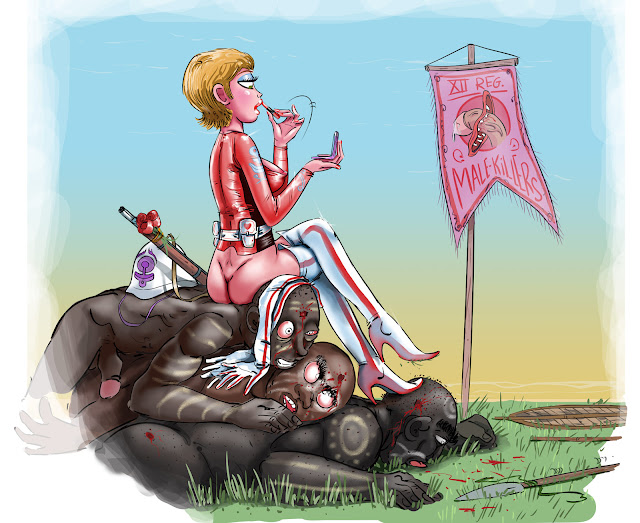 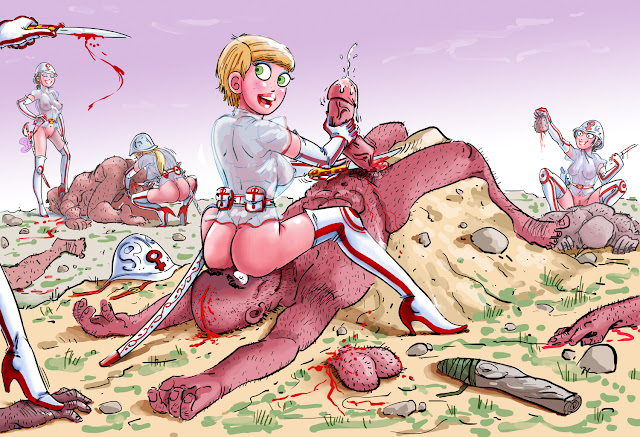 After exterminating the horde of wild males who tried to steal the harvests of the border villages (living from female labor is typical of such lazy and useless creatures) the beautiful girls of the regiment are dedicated to “collect” their deserved “harvest” of trophies.

“What huge cocks and balls these beasts have, and how small their brains are! HAHAHA!!”.
Publicado por FJCANO en 12:30 1 comentario:

Until Death Do Us Part 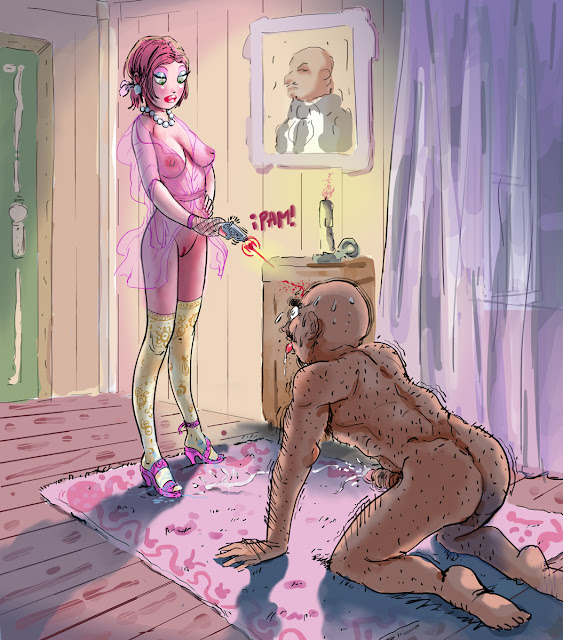 “Of course, it was not enough for you to marry a woman much younger than you … you had to try to seduce the maid …”

“Like all men, you’re nothing more than a cockroach that only thinks with the cock, come on, crawl on the ground like the cockroach you are!”

The pathetic little man prostrates himself before his young wife and trembling bends down to kiss and lick her beautiful feet, begging for mercy.

“Please, don’t kill me, no … I swear it was a mistake … no woman is as attractive as you to me… you’re the only one”.

“If that’s true … jerk off! Look at me and jerk off, I want to see how long it takes you to come!”

“Yes, yes, of course … See, my dear, it’s hard as a rock! And it’s for you … I will not look at another woman … I’ve been so stupid … From now on I’ll be your slave, you will be the true mistress of the house … And I will adore you as a goddess! You see, dear? OOOooh, yes … this is in your honor … Ooooh … it’s in your hooonoorrrr!“ PAM
Publicado por FJCANO en 12:26 No hay comentarios: 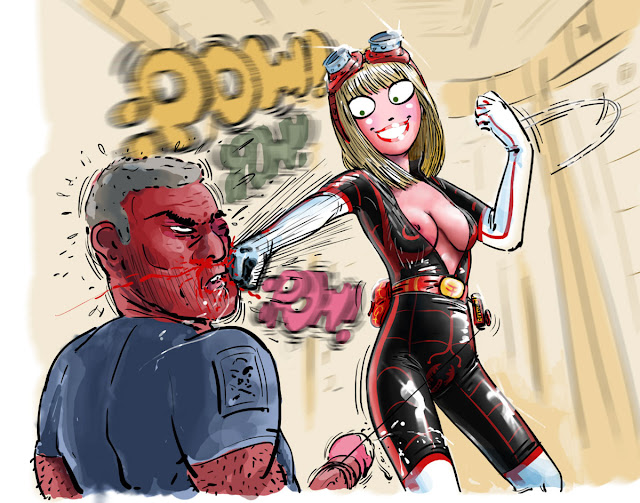 The beautiful murderess laughs gleefully when she sees the fearsome General, the Terror of the Imperial Fleet, kneeling before her, reduced to a state of complete submission, trying to lick her boots instead of defending herself from the rain of blows .

She knows that she should end up with the stupid brute, but it’s so funny to torture them … She loves to let these male cockroaches know who’s boss before crushing them under her boot .
Publicado por FJCANO en 12:21 No hay comentarios: 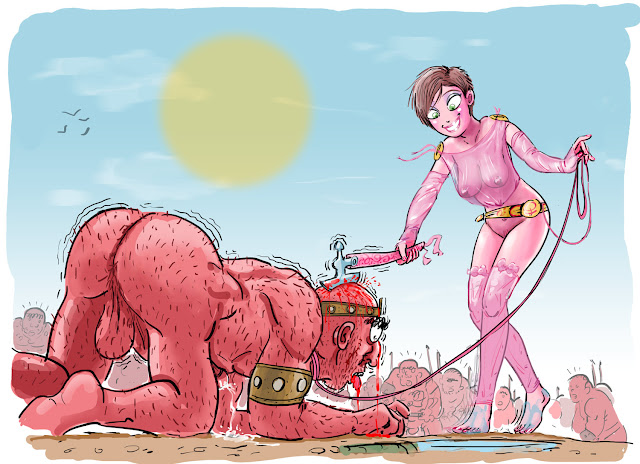 When the beautiful foreigner coming from distant lands dared to challenge the powerful king TOR everyone laughed. But when they saw their king, the most powerful of all the warriors, be walked with a leash and lick the feet of the beautiful warrior, they understood that they were before a clearly superior creature. And they did not hesitate to submit to her when she ended the stupid brute and put on the crown.
Publicado por FJCANO en 11:56 No hay comentarios:

The Swordwoman ant The Beast 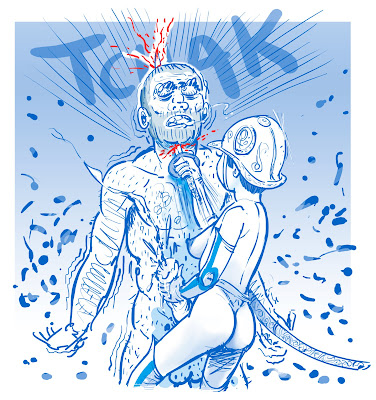 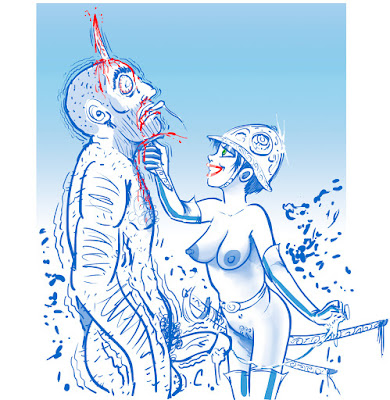 Goddess Save The Queen 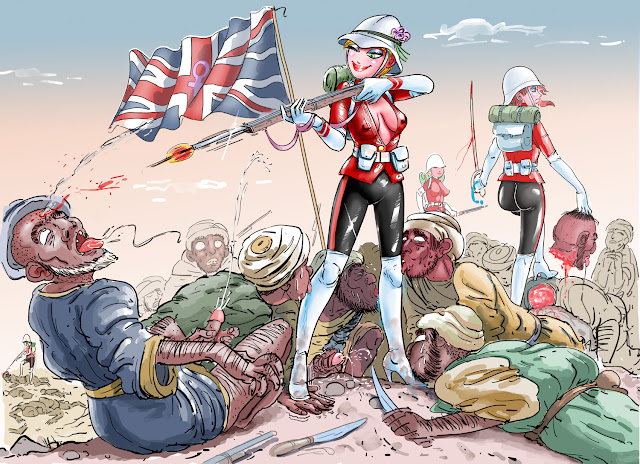 The primitive savages are powerless against the overwhelming superiority of the white woman.
Publicado por FJCANO en 11:45 1 comentario: